The architectural solution for this Hotel Unit (with a general U-shaped plan facing south), derives from a large clearing existing previously at this location, free of pines that still dominate the area, allowing for a very discreet insertion of new volumes and taking advantage land gap that already existed .

Thus resulted in great evidence, central location and arrival space with a double height atrium, framing the outdoor patio, the body of the rooms on the east framing the Golf Course, and cuisine area and the west side and with easy access.

The pool at the spa on the ground floor, opened to the terraced garden to, is no more than the logical corollary of this same option of implantation of new forms. 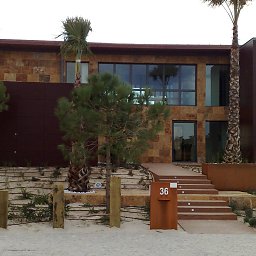