Both the shape of the land, and its view and surroundings, suggested asd a morphological structure that define exteriors with large dimensions, and therefore the organization of private outdoor space became the dominant concern in the development of the project .

By this were thought the solutions in the form , urban structure , scale , sense of solid green , formed the matrix that defined the architecture, as well as the use of a limited palette of materials that would articulate well with the dominant green (glass , lacquered light coloured stones ) , visually streamlining the presence of the built area.

So we created a dialectical discourse between the natural elements (green outdoor areas and the built ( which gives it shape and frames it ) , establishing visual frameworks diversified, in an attitude distinctly worried with a certain pedagogy of taste and aesthetic contemplation of the environments we wanted to draw.

To accentuate the " sense of hospitality " from the outside , we dealt with the built forms in a slightly staggered way , lending volume almost in a baroque sense, while we created vertical cuts between bands to put panoramic elevators , allowing the users to see the green and the sea whenever they arrived at home. 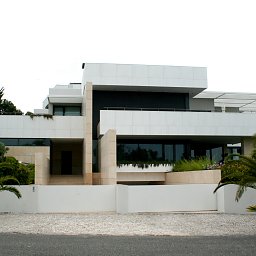 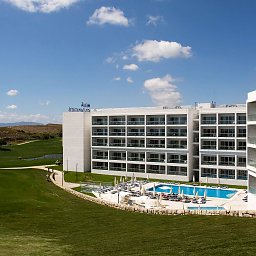